Today’s musical interlude: a virtual choir of 5,905 singers from 101 countries. Each filmed themselves singing. Eric Whitacre and his team then assembled those performances into a unified whole.

To give you a sense of scale: the video includes 5 minutes of the choir performing “Fly to Paradise” and 8 minutes of credits.

Norwood Viviano’s installation Cities: Departure and Deviation brings three-dimensional tangibility to the population history of 24 American cities. Here are the first dozen of his blown-glass pieces, Atlanta through Los Angeles:

Chicago, short and squat, is fifth from the left.

In Words and Years, Toril Johannessen brings a certain whimsy to data tracking word use in leading academic and popular publications. Here, for example, she documents the triumph of “Hope” over “Reality” in political science: 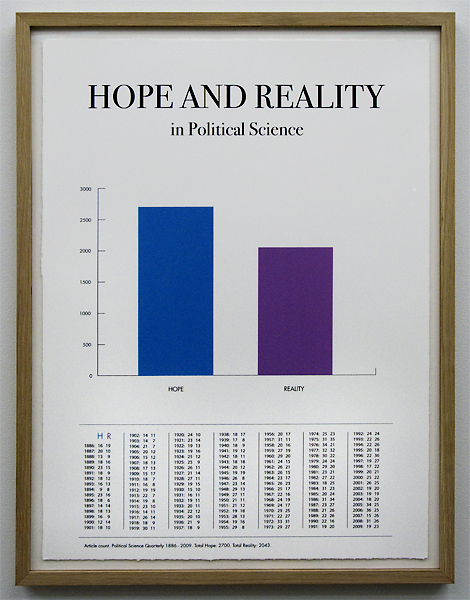 High frequency trading (HFT) has taken off like wildfire in recent years. Nowhere is that better illustrated than in this stunning animated GIF from Nanex, a provider of streaming market data (ht: Felix Salmon).

The gif shows the rise in HFT or algorithmic trading from 2007 through early 2012. It doesn’t capture last week’s meltdown at Knight Capital, but you can see many other seminal events of recent years.

I find it strangely beautiful, like watching a fire build.

Ran into Felix Salmon out at the Kauffman Foundation’s economic bloggers confab. His latest Felix TV breaks the contemporary art market down into two simple metrics: $ per spot and $ per stripe.

Feliz says buy spots. But a word of warning: Damien Hirst seems hellbent on flooding the dot market. Somehow I think the price of a dot will plummet when he releases his painting with 2 million dots.

If you are a Godel, Escher, Bach kind of person, this short film is for you. Cristobal Vila presents Inspirations:

Future generations will remember September 15, 2008 as the day that Lehman died. But the art world has another memory of that fateful day: the opening of a London auction of works by artist Damien Hirst. Over a period of two days, Sotheby’s rapped the gavel on almost $200 million of his new works, marking the high point of the contemporary art bubble that accompanied all the other asset bubbles.

Not familiar with Damien Hirst? He’s probably most famous for a 14 foot tiger shark preserved in formaldehyde (titled “The Physical Impossibility of Death in the Mind of Someone Living“), spot paintings, and an as-yet-unsold skull covered with diamonds (“For the Love of God“).

The Economist marks this anniversary with enjoyable retrospective on the auction, which was notable not only for the amount of money that changed hands, but also because it was a very rare example of an artist using an auction in the primary market. Artists usually sell through galleries, where dealers try to place new works in the hands of “worthy” buyers. But Hirst decided to take his new work directly to the auction market — with stunning, if transient, success:

The Economist suggests that Hirst was frustrated with the traditional model, in which initial buyers sometimes flipped pieces at a profit in the auction market after buying from a gallery. Hirst thus set himself a mission, saying “The first time you sell something is when it should cost the most” and “I’ve definitely had the goal to make the primary market more expensive.” And he certainly succeeded, albeit with a little help from the credit market.

Other interesting economic tidbits about Hirst’s work are his exceptional reliance on assistants to execute the works (he clearly understands the idea of the division of labor) and the uncertainty about just how many works he (and his team) have created over the years.