According to a recent study, the United States has more public sector corruption than do many other developed economies. More precisely, Transparency International reports that corruption perceptions are higher for the United States than for 21 other countries. Those nations perceived to be less-corrupt are:

A more positive spin would be that the United States is viewed as less corrupt than 155 other nations in the study. But many of those other nations are much poorer. For benchmarking purposes, it makes sense to compare the United States to other developed economies. The following chart thus shows the Transparency International measure (in which higher numbers represent less corruption) for all the members of the Organization for Economic Cooperation and Development: 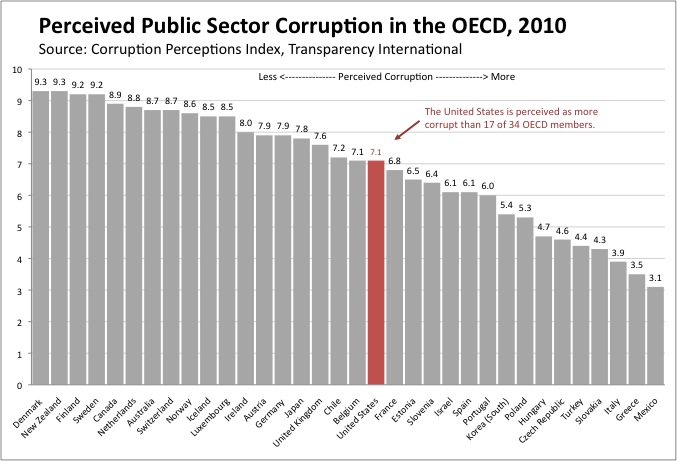 The United States ties with Belgium as the 18th least corrupt member of the OECD.

These findings gibe with what several friends in the international investment community have told me. In their view the United States has slipped in its commitment to the rule of law. At the margin, that makes places like New Zealand, Australia, and the Nordics more attractive places to invest.

About the Transparency International numbers: TI creates its Corruption Perceptions Index by aggregating 13 corruption surveys performed by other organizations (e.g., the World Bank and the Economist Intelligence Unit). As The Economist notes, the TI methodology raises some questions. But it’s still an interesting snapshot of corruption perceptions in the world.