Neil Barofsky, the Special Inspector General for the Troubled Asset Relief Program (affectionately known as SIGTARP), is making headlines with his estimate that the government has provided “potential support totaling more than $23.7 trillion” in fighting the financial crisis. That estimate will be officially released on Tuesday morning in the SIGTARP’s latest quarterly report (you can find an early copy here – ht WSJ). 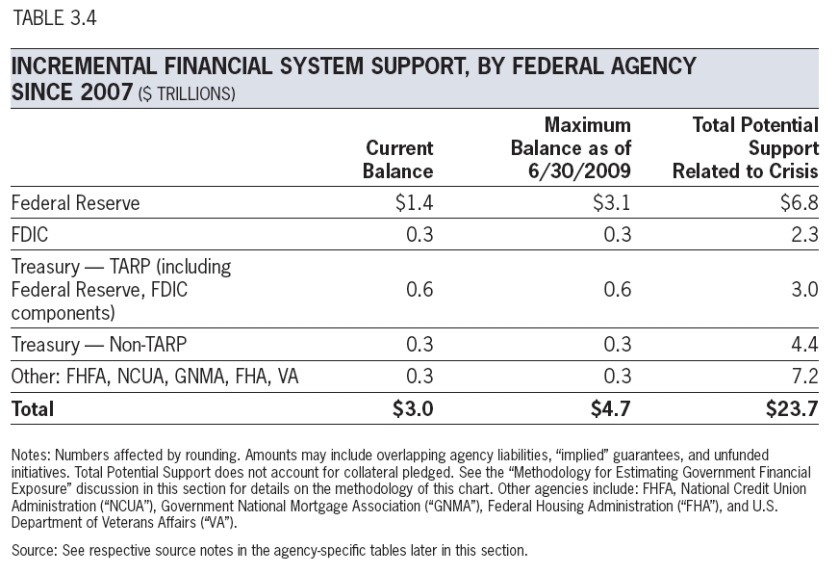 As the media are already noting (e.g., WSJ and Yahoo), there are many reasons to believe that the $23.7 trillion figure is overstated. For example, as noted in the footnote to the table above, the figure “may include overlapping agency liabilities … and unfunded initiatives [and] … does not account for collateral pledged.” In other words, there may be double-counting, some of the programs won’t happen or are already winding down, and the estimates assume that any collateral is worthless. For example, to get to $5.5 trillion in potential losses on Fannie Mae and Freddie Mac (part of the $7.2 trillion Other category), you would have to assume that all GSE-backed mortgages default and that all houses backing them are worthless.

In short, the SIGTARP estimate is a way upper-bound on likely Federal support to the financial support. That fact shouldn’t detract, however, from the importance of the rest of this report.

END_OF_DOCUMENT_TOKEN_TO_BE_REPLACED

Over the past year, the U.S. government has acquired an unprecedented investment portfolio, including a majority stake in GM and a large ownership stake in Chrysler. These investments have raised a plethora of difficult policy challenges. One of the most important is the ongoing risk that private business decisions may get transformed into public policy issues. Or, put more bluntly, that policymakers might use the ownership stakes as justification for and leverage to pursue their own policy agendas, regardless of whether they would be good for the companies.

Yesterday’s newspapers provided an excellent example of this risk. Some lawmakers want to use legislation — the annual appropriations bill that funds financial services and general government — to restore the franchise agreements of several thousand dealers who were terminated as part of the restructuring of GM and Chrysler. It’s easy to see how such a proposal can gain traction in the House of Representatives. Every terminated dealership will get a sympathetic hearing, at a minimum, from their local representative. But such meddling is not in the interests of GM and Chrysler, nor the nation at large.

END_OF_DOCUMENT_TOKEN_TO_BE_REPLACED

I’ve previously argued that Treasury ought to auction these warrants to the highest bidder. Auctions would (a) be transparent, (b) provide full, fair value to taxpayers, (c) free banks from the TARP, and (d) give banks the opportunity, but not the requirement, to repurchase the warrants. As close to a win-win-win policy as one can hope for in Washington.

Unfortunately, as I noted in a follow-up post, the original TARP investment contracts include a specific process by which banks can negotiate to repurchase the warrants. As much as I like auctions, I believe even more strongly that the government should live up to its agreements. Which is why you haven’t seen me blogging about warrant auctions lately.

Earlier today, Treasury announced the process by which it will divest itself of the warrants of banks that have repaid their original TARP investments. This announcement includes lots of good news: END_OF_DOCUMENT_TOKEN_TO_BE_REPLACED

How much is TARP costing American taxpayers? We know that Congress originally authorized up to $700 billion in TARP investments. And we know that $439 billion has been committed to various programs. But how much of that money are taxpayers likely to see again? And to what extent will they be compensated for making those investments?

The Congressional Budget Office took a crack at answering those questions in a report released last night. The headline finding is CBO’s estimate that subsidies in the TARP program are $159 billion. Taxpayers put up $439 billion and, in return, now own assets (including recent repayments) worth $280 billion.

The following chart shows the estimated value of the TARP portfolio (dark red) and subsidies (light red) across the major TARP programs: 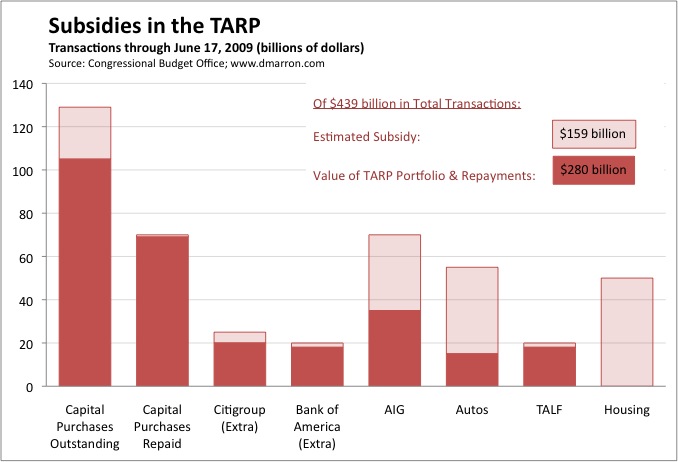 Key insights from the chart: END_OF_DOCUMENT_TOKEN_TO_BE_REPLACED