Today’s jobs data exceeded expectations. Payrolls expanded by 114,000 in September, in line with expectations, but upward revisions to July and August added another 86,000 jobs, so the overall payroll picture is better than the headline.

The big news, though, is that the unemployment rate fell to 7.8%. That’s big economically and symbolically. Indeed, it’s so big that conspiracy-mongerers are suggesting the BLS cooked the numbers to help President Obama get re-elected. Let there be no doubt: That’s utter nonsense.

Other numbers also indicate an improving job market: the labor force participation rate ticked up to 63.6%, the employment-to-population ratio rose 0.4 percentage points to 58.7%, and the average workweek increased by 0.1 hours. All remain far below healthy levels, but in September they moved in the right direction.

Despite the drop, unemployment and underemployment both remain very high, as well. After peaking at 10% in October 2009, the unemployment rate has declined a bit more than 2 percentage points. The U-6 measure of underemployment, meanwhile, peaked at 17.2% and now stands at 14.7%: 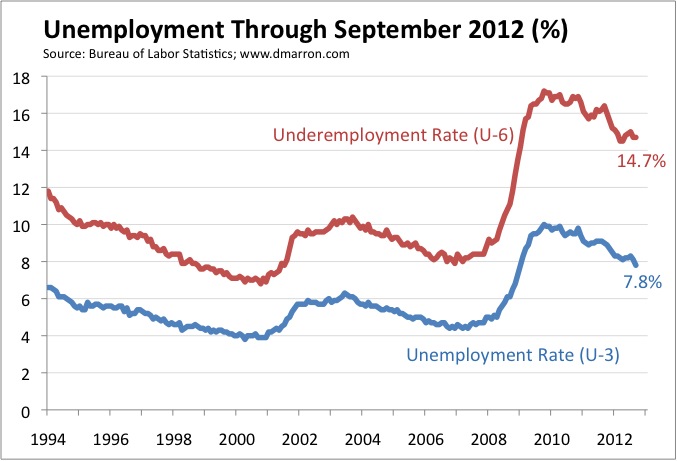 As you may recall, the U-6 measures includes the officially unemployed, marginally attached workers, and those who are working part-time but want full-time work. One anomaly in the September data is that the unemployment rate fell from 8.1% to 7.8%, but the U-6 remained unchanged at 14.7%. Why? Because the number of workers with part-time work who want full-time work spiked up from 8.0 million to 8.6 million.

4 thoughts on “A Good Jobs Report”