That’s the bumper sticker for most tax reform proposals. To varying degrees, everyone from President Obama to Governor Romney to Bowles-Simpson has embraced it. Whatever your revenue goal, you can get there with lower tax rates if you are willing to slash tax breaks and thus broaden the tax base.

But cutting tax breaks to pay for lower tax rates is harder than it sounds. There may be more than $1 trillion in annual tax breaks out there, but that doesn’t mean there’s that much easy revenue available to policymakers. 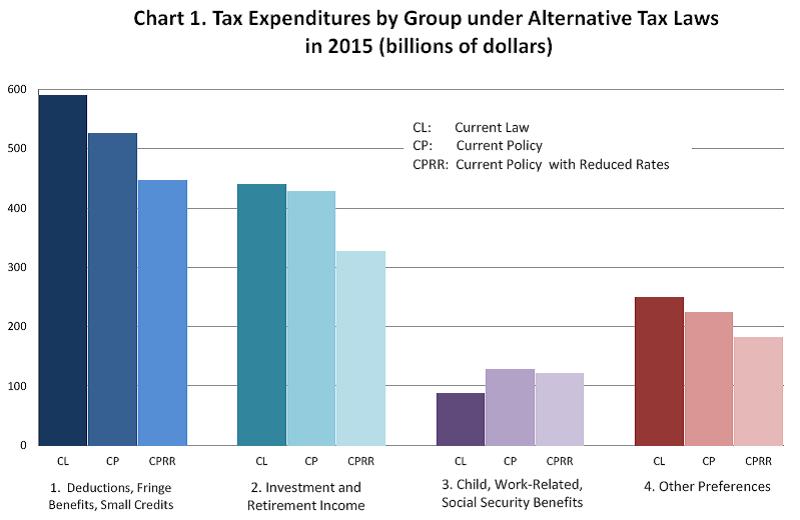 2. Some tax preferences may be hard to curtail for political or administrative reasons. For example, cutting back widely used and popular preferences such as the deductions for mortgage interest and charitable contributions may be politically difficult. And it would be administratively impractical to require homeowners to include in their income each year the rental value of their homes, although leaving that income untaxed is a tax expenditure (with a sizable cost associated with it). If such preferences can’t be curtailed as part of a realistic tax reform, it becomes harder to find the revenue needed to pay for lower tax rates.

4. A tax reform that includes wholesale, immediate repeal of a significant portion of tax preferences would significantly disrupt existing economic arrangements in ways that might be deemed unfair. Instead, some preferences might be only partially curtailed, and some cutbacks might phase in, possibly over an extended period of time. In addition, taxpayers would likely change their behavior to lessen the impact of these cutbacks. All of these “real world” effects would likely reduce, perhaps substantially, the revenue gains from cutting tax preferences.

The chart above illustrates the first of these points. It shows how big tax breaks are in three scenarios: current law (in which all expiring tax cuts actually expire), current policy (most get extended), and current policy with reduced rates (rates get reduced by another 20 percent). The top income tax rate in 2015 under these scenarios is thus 39.6 percent, 35 percent, and 28 percent, respectively (before accounting for Medicare taxes and the health reform tax on investment income).

Most official estimates of tax preferences use the tax rates in current law. Under those rates, TPC estimates that the value of most deductions, fringe benefits, and small credits in 2015 is $590 billion. Under the lower rates of current policy, however, those preferences are worth only $525 billion. And under the still lower rates of current policy with reduced rates, they are worth only $446 billion.

For more, see Howard Gleckman’s take on the report.