At the time, that seemed like an enormous disparity between the two prices. In retrospect, we hadn’t seem anything yet. As of yesterday, the ratio stood at more than 33: 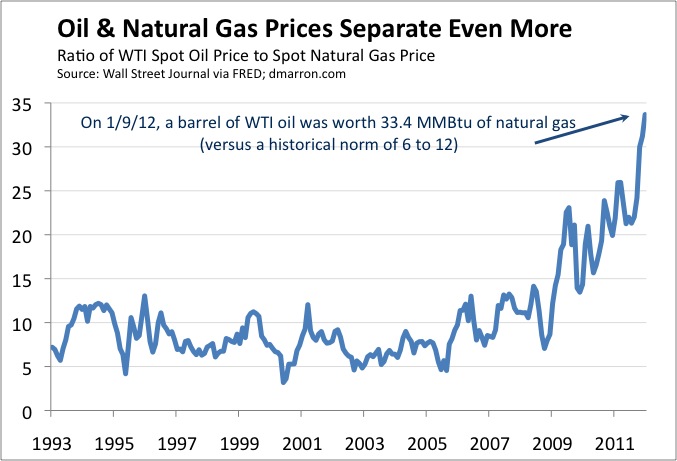 A barrel of oil has roughly 6 times the energy content of a MMBtu of natural gas. If the fuels were perfect substitutes, oil prices would thus tend to be about 6 times natural gas prices. In practice, however, the ease of using oil for making gasoline means that oil is more valuable. So oil has usually traded higher.

But the current ratio is unprecedented. Each Btu of oil is now worth about five times as much as each Btu of natural gas. Thanks to a torrent of new supply, natural gas prices are down at $3.00 per MMBtu even as oil (as measured by the WTI price) has risen back above the $100 per barrel mark.

Perhaps natural gas vehicles will be the wave of the future?

Note: Energy price aficionados will note that I’ve used the WTI price in these calculations. That used to be straightforward and unobjectionable. Now, however, we have to worry about another pricing discrepancy: WTI is very cheap relative to similar grades of oil on the world market (for background, see this post). For example, Brent crude closed Monday around $112 per barrel, well above the $101 WTI price. Brent prices are relevant to many U.S. oil consumers. There’s a good argument, therefore, that my chart understates how much the price ratio has moved.