The Bureau of Economic Analysis released its first look at Q1 GDP growth this morning. BEA estimates that GDP grew at a solid 3.2% annual pace in the first quarter. That’s slower than the 5.6% pace of the previous quarter, but is otherwise the strongest showing since the third quarter of 2007.

The following chart illustrates how much various types of economic activity added to (or subtracted from) first quarter growth: 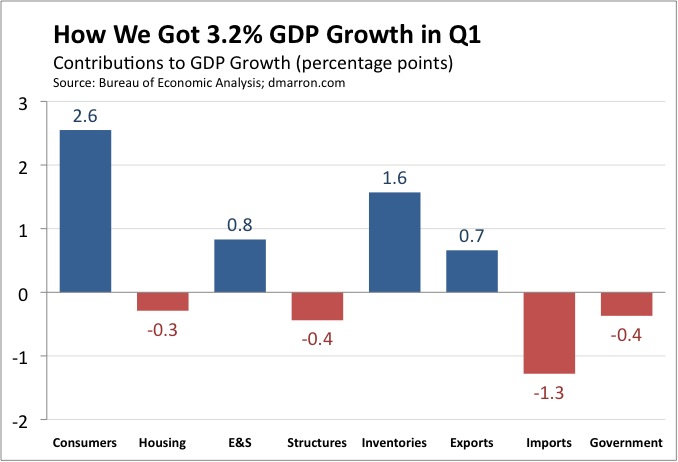 The big story is the return of the American consumer. Their spending increased at a 3.6% pace during the first quarter, the fastest pace in three years. (Consumer spending added 2.6 percentage points to overall growth because it makes up about 70% of the economy).

Business investment in equipment and software (E&S) showed continued strength, rising at a 13.4% pace (and adding 0.8 percentage points to overall growth). That’s down from the blistering 19% recorded in the fourth quarter, but is still remarkably strong.

Inventories–the big story in Q4–continued to boost growth as well. Inventories actually increased in the first quarter, after seven quarters of declines.

On the downside, construction continued to suffer, with both housing and non-residential structures declining. Government spending fell as well, as reduced spending by state and local governments more than offset a moderate increase in purchases by the federal government.