Yesterday marked a new record in the divergence between oil and natural gas prices.

As noted in a small item in the Wall Street Journal, the ratio of oil prices ($ per barrel) to natural gas prices ($ per million BTU) hit a record 24.5 at yesterday’s close. As you can see from the following chart, that’s far out of line with historical norms: 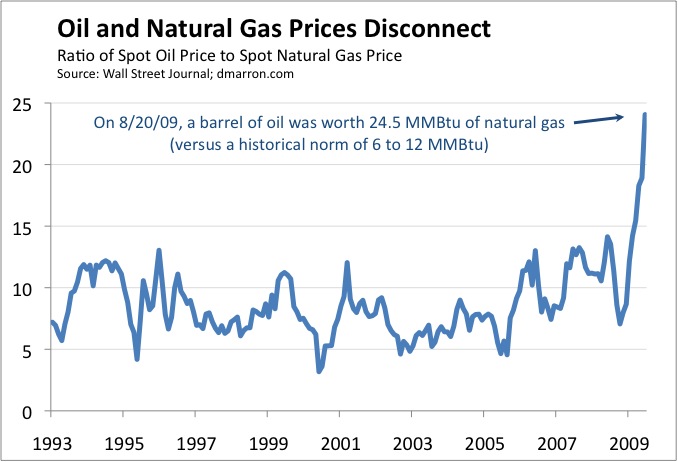 A barrel of oil has roughly 6 times the energy content of a MMBtu of natural gas. If the fuels were perfect substitutes, oil prices would tend to to be about 6 times natural gas prices. In practice, however, the ease of using oil for making gasoline makes oil more valuable. As a result, oil has usually traded between 6 and 12 times the price of natural gas.

That’s changed in recent months. Natural gas prices have fallen to $3.00 per MMBtu, weighed down by new supply and weak demand. Oil prices, however, have stubbornly increased to more than $70 per barrel. That’s down sharply from the $100+ prices of last year, but up sharply from the $40 – $50 range earlier this year.

Where do prices go from here?

History clearly suggests that the price gap will eventually narrow, through some combination of oil prices falling and natural gas prices rising. Over at Econbrowser, Jim Hamilton has some nice statistical work suggesting that natural gas prices have typically played more of a role in such gap narrowing than have oil prices. That would suggest an upcoming increase in natural gas prices but, as Jim notes, they would have to do so in the face of dramatically increased supply.

Jim wrote his piece a month ago … and the gap between the prices widened further. So, perhaps not surprisingly, it is very difficult to use these historical relationships to judge short-term prices movements. Over the longer-term, however, I feel confident that demand for natural gas will rise to meet the new supply and that, as a result, the oil vs. natural gas price relationship will eventually move back to normal. Natural gas is cleaner than coal and is available in large quantities in the U.S. and Canada. As a result, natural gas is on the short-list of potential responses to climate change and oil dependence, two concerns that aren’t going away anytime soon.

P.S. Note that I have carefully obeyed the first law of forecasting: I have given a prediction (the relationship between oil and natural gas prices will normalize), but I haven’t given a date.

12 thoughts on “The Disconnect Between Oil and Natural Gas Prices”