Markets greeted this morning’s jobs reports with enthusiasm, as the headline measure of job losses in May — 345,000 — came in significantly lower than expected.  Under normal circumstances, losing more than 300,000 jobs would be bad news.  Of course, these aren’t normal circumstances.

The unemployment rate in May was much less welcome, rising to 9.4% from 8.9% in April.  Part of the increase was due to the labor force expanding — a positive sign — but most was due to an increased number of people being unemployed.

These figures all refer to the headline measure of unemployment (U-3, in the lingo), which focuses on workers who have lost a job and are looking for a new one.  The government also publishes several broader measures of unemployment that account for other ways in which workers may be less employed than they desire.  The broadest of these, known as U-6, adds two groups to the regular measure: those who are marginally attached to the labor force (people who are willing to work and have worked in the past, but aren’t actively looking; this includes discouraged workers) and those who are working part-time even though they want to work full-time.

As shown in the following chart, the U-6 paints a grimmer picture of the U.S. labor market: 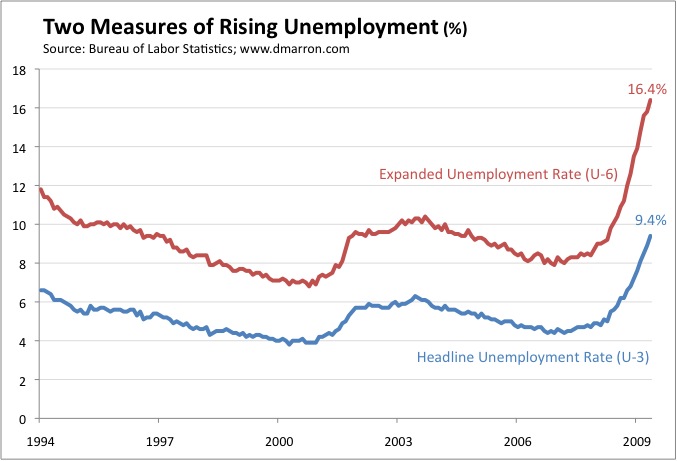 Clearly, there is enormous slack in U.S. labor markets.

The following chart shows the difference between the two measures of unemployment; in other words, it shows the fraction of workers who are marginally attached or working part-time when they’d prefer to work full-time.  Not surprisingly, this group of workers has increased sharply during the recession: 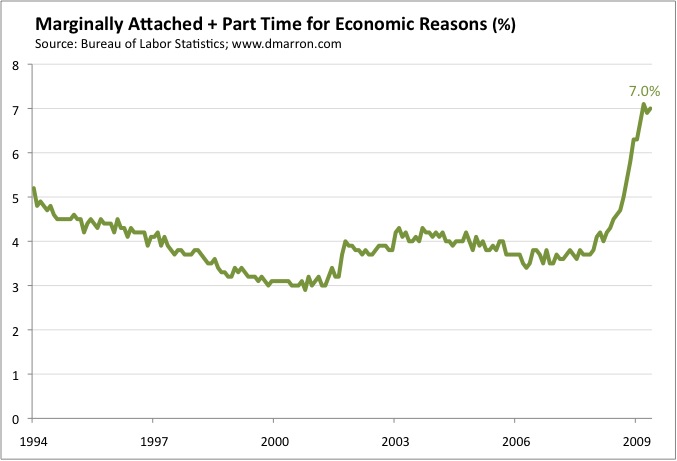 Note: An earlier version of this post incorrectly referred to the headline measure as U-1.